I love playing characters on stage in improv: big, bold, super hilarious characters. My favorite creation is a washed-up 1980s rock star who is super excitable and thinks he’s way sexier than he has any right to be. No, I’m not talking about Lil’ Sweet from the Dr, Pepper commercials. I also created a sexy rock superstar, completely coincidentally, who happens to be part David Lee Roth and part Miss Piggy. (And I’m not jealous of Justin Guarini’s career, you are!)

Playing characters is easy, it’s fun, and sometimes it’s just what the audience is looking for: somebody to laugh at.

My favorite comedians are character actors: Robin Williams, Eddie Murphy, Melissa McCarthy, Carol Burnett, Jim Carrey, Mike Myers, Dana Carvey. When they’re in the zone, it feels like they could say or do anything, like read aloud their tax returns, and it’d still be funny.

And for me, some of my biggest laugh-getters ever on stage resulted from playing characters with strong comic perspectives. And the biggest belly laughs came from being funny without really even knowing why. I was just out there making strong choices, and literally surprising myself.

I was in too deep. I was committed and confident. I was in the zone. The audience was laughing at me, not with me.

And that’s perfectly fine in entertainment. It still counts, y’all.

If done right, playing a character is the quickest and easiest way to get consistent laughs on stage. It means never having to worry about what to say or do next. And the best part is, the more committed you are to the character’s reality, the funnier it can be.

And there’s really one thing that makes all this magic possible, it’s called:

Seal by Airwolfhound via flickr.com

The comic perspective is like the Flux Capacitor of character-based improv: it’s what makes time travel possible, err, comedy possible.

It’s a technique used by writers to develop comedic characters, but with some practice it’s easily adapted to the improv stage.

And I didn’t even learn about it in an improv class, I picked it up from a darn good book called, The Comic Toolbox: How to Be Funny, Even if You Think You’re Not.

Author John Vorhaus says: “The comic perspective is the character’s unique way of looking at his [or her] world, which differs in a clear and substantial way from the ‘normal’ world view.”

“[It’s] the Heart and Soul of any comic character… the motor that drives [their] comic engine. Know this one thing about your character and you’ll know what makes them consistent and reliably funny forever.”

Knowing that one thing about your character can guide every other decision you make on stage. It’s your mind’s focus, your heartbeat, your raison d’être (I know french! “très oui, pitre”).

But what is that one thing, that unique point of view? Consider these examples of famous characters and their corresponding comic perspectives, or POVs:

Vorhaus would say that they all have the same thing in common: their actions and words are defined by their “unique, quirky, offbeat way of looking at the world.”

And when you understand your character’s unique POV, you understand what makes them behave the way they do. When you’re playing a character on stage and you know that one thing, lock it in, believe in it, like really believe in it and treat it seriously without winking or breaking. Let that one thing be your guide, like your conscious, but you know, listen to it more.

Because the audience sees what you’re doing, and they’re unconsciously comparing you to what a normal person would do. Yes, they are judging and laughing at you. You are a comic character, you are not normal like them.

Sure they recognize your behavior as human, but your POV makes you a little more exaggerated. Different. And that difference is what makes you funny, what Vorhaus calls the “laughter gap:” The gulf in the audience’s mind between your comic reality and the real reality. The “gap that the laughs will spark across.”

So how do you quickly establish a POV on stage, anyway? This ain’t writing, it’s improv after all. 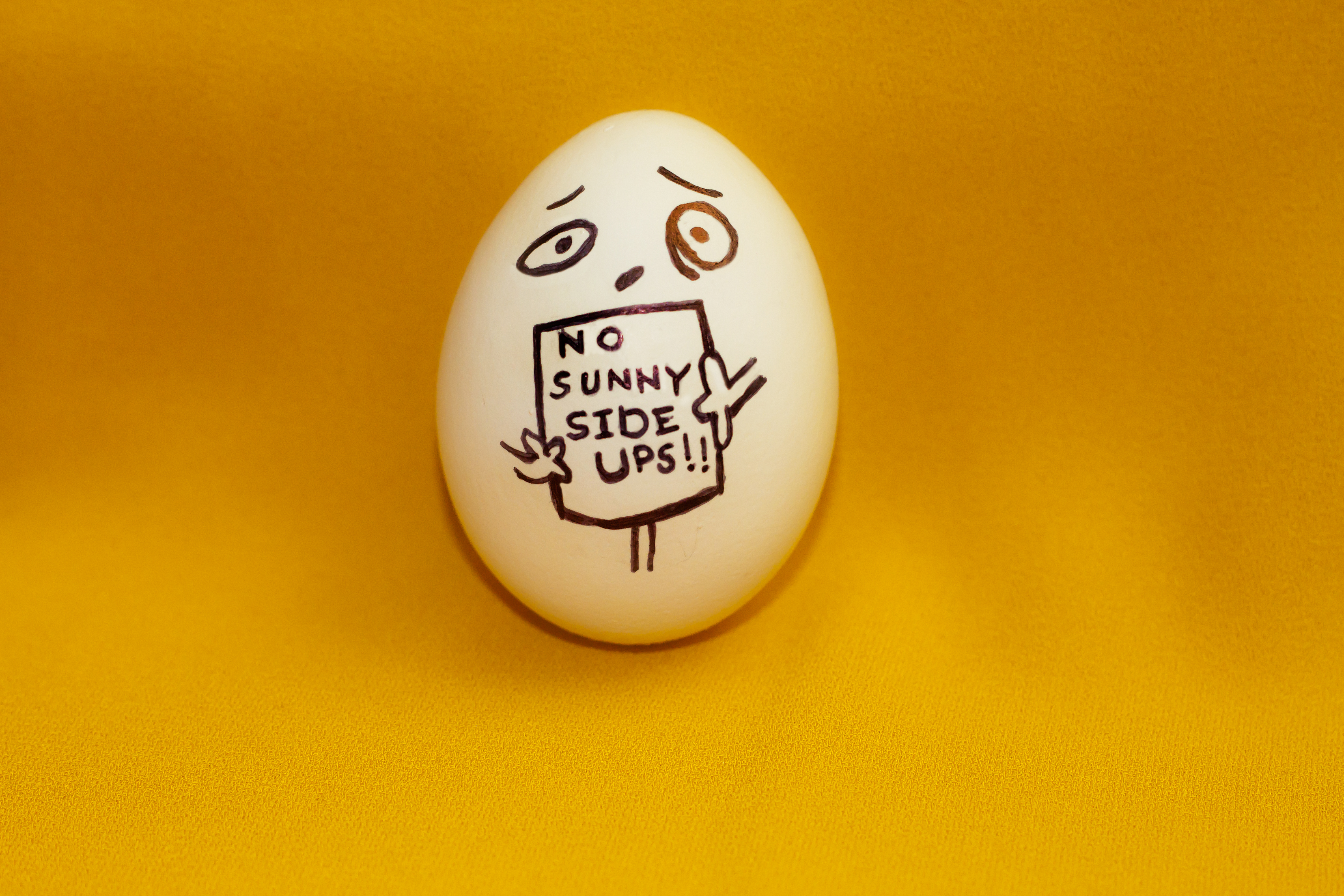 Egg by Pushkr via flickr.com

A mantra is like your POV in a simple phrase, like for Yosemite Sam, “everything makes me angry,” or Leslie Knope, “I think I can overcome any challenge I put my mind to, no matter what.” The key for that second one is the “no matter what.” You lock it in, and the more difficult the task to overcome, the funnier it will be when you try but fail. Find your mantra and repeat it silently in your head as necessary. (Or, make a funny character choice and have it be the only line of dialogue you say, like Groot in Guardians of the Galaxy. Try it once, see what happens.)

Or just… feel your way

Part of being a successful actor and improviser is understanding how real people work. How easily that comes to you will depend on how naturally empathetic you are, and how well you’ve trained.

But once you know, you just know what a character will and will not do. Maybe it’s a character you’ve played before, or maybe it’s based on your mother (she’s the best worrier!) or maybe it’s as simple as a single exaggerated emotion, like Yosemite Sam: He’s just always on the brink of an angry meltdown… so if you were playing someone like him, you’d just be constantly furious. At everything. The smaller and more inconsequential, the funnier.

Or like your mom, the world’s best worrier. Everything worries her, from her children’s dating behaviors, to the cold air, to that pain she has in her pinky finger nail. It’s in the nail itself. No, the doctor’s don’t know what it is, but it’s probably…. (you make this funny, I’ve got this blog post to finish).

But you can see how one phrase can spiral off into content, and inform how you react to what your scene partner is saying. Which brings me to another point:

Use your new-found character powers for good, not evil

You know what I mean, don’t overpower your scene partner with your wacky character choices. Remember the good stuff about scene work: listening, supporting, etc. And unless you’re the only one out there, share the stage, let others play with your character, too. You got this, I’m just sayin’ because sometimes a character is so great they can overpower somebody else. And if you’re character is really so good that they’re blowing people off the stage, then please write a one-person show out of them or a web series or a Snapchat thingie. Take it to the next level, yo.

Also, beware of choices so wacky that they just go too far, and venture into spoiled ham territory. You don’t want the audience going, “I don’t buy it. Too zany. Too much. Time to get a lobby beer.”

That said, some people think Jim Carrey is spoiled ham, and I don’t think he really cares. So as long as you can justify that your actions are honestly what your character would do, and you aren’t just trying to be funny, go ahead and be the next Ace Ventura.

Controversy! That’s right, I said it: you should not follow the funny all the time. This is weird for an improviser to say, because it’s one of those phrases we hear all the time like “yes, and…” But we’re talking about acting now, not just improv. I think if you’re looking to bail on your character to make a joke, you are in dangerous territory of breaking the reality for your audience. Remember before when I said I was so in the zone that I didn’t know why I was being funny? It’s because I was committed and didn’t see the audience’s’ perspective. In modern improv I think we’re trained to be constantly checking in with them. We’re already breaking the 4th wall by coming to the audience for suggestions, but by commenting on the scene or making puns, it can get kind of exhausting after a while. Breaking the fourth wall in the middle of a scene is as much a form of negation as anything else. If you want to study comedic acting and take your skills to sketch, plays or the big screen, then learn how to not go for the joke if it violates the reality of your character, if it’s not something your character would do.

I know, it’s hard to stop trying to be funny, but try it out for a while. Trust in your character to be funny for you. That’s a weird thing to say, but once you’re in the zone you’ll understand what I mean.

And don’t be afraid to play the comedic foil

By which I mean, the non-unique POV character. Comedic characters are fantastic, but sometimes you need the “normie,” who will react accordingly to the other characters. Be on the audience’s side, say what everyone is thinking about this character. Still play supportively, not negating the reality, but just kinda… reacting. It may seem less glamorous at first, but can be just as funny. Master comedians like Bob Newhart and Jack Benny made careers out of a their reactions with a raised eyebrow or hand on the cheek.

So: now you know the secret to playing consistently funny characters in improv. Good luck out there.

But wait, there’s more! Like I said earlier, it takes practice springing forth these spontaneous personalities. Try working them out with your director or acting coach using this bonus exercise (shabba!):

A single improviser is out on stage and begins a monologue in character (that’s you!). The director holds a bell, and after a few seconds dings it once. Every time there’s a ding, the improviser changes their character through voice, movement, emotion —anything they can think of. Eventually, the dings come faster and faster, until they are so fast that the improviser is frenzied and frustrated, a whirlwind of sound and movement with zero time to think or even speak.

Afterwards, ask yourself how it felt. Was it annoying to keep changing so quickly before you even knew what was happening? What did you notice about the characters you created? What did you use the most to bring them to life, your body, voice, accents?

But these aren’t complete perspectives, you may say. These are just accents or silly moves or exaggerated emotions. Right well, yeah. This exercise gets your mind working quickly to establish something strong at the very top of the scene. Follow this up with some two-person scene exercises, but keep in mind that you’re setting up something strong at the top. Like Mick Napier says in Improvise: Scenes from the Inside Out, once you set up that one thing at the top, you follow the pattern, keep doing it, and it will inform you as to how to behave in the rest of the scene. POV follows from there.

And don’t worry if you’re uncomfortable doing this exercise at first. It may take time to learn how to use your body and voice in making bold character choices. But the reward is being able to play by staying completely out of your head and in the zone like the greatest comedic actors of all time, consistently.

Comic characters are the best.

So there you go, let me know what you think. Did you find the exercise helpful? Did the concept of the comic perspective improve your ‘prov? Do you want to punch me in the face?